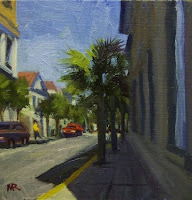 Yesterday, one of the “teacher’s assistants” demonstrated, perhaps, how much the students enjoy that assigned duty. The job, which rotates each week, involves little more than reading off the various steps of my prepared lesson, and sometimes calling on classmates and giving out stickers, but the kids seem to find a feeling of honor and accomplishment in performing the small tasks. They take it seriously. They sit up straight, speak with at least a semblance of clout, and move through their duties with youthful grace. Yesterday, a boy who is usually retiring and quiet in class was carrying out the tasks of the TA, and at one point I suggested that we could skip a segment that he was supposed to read. I thought his usual detached manner would lead him to quickly agree, but, no, he shook his head. To clarify, I asked him if he wanted to read the segment, and he slowly but rather decisively nodded. He proceeded to read it, and then we moved on with the lesson. Thinking about it later, I wondered if that was perhaps one of the first times in a long while (perhaps ever) that this boy had actually exerted some authority and been a leader. He was the person in charge for those few minutes, and he was taking pleasure in the rare feeling that comes with leadership. It made me grateful that I’m able to give a different  student each week the opportunity to enjoy that feeling.