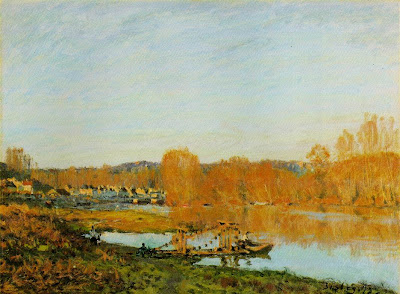 Alfred Sisley, "Autumn: Banks of the Seine near Bougival", 1873

Today was one of the best days of teaching I can recall. Everything went the way I always dream it will happen: students happy and attentive, the lesson a clear and reasonable one, and everything moving along like the parts of an oiled machine. As the classes came and went, I couldn't believe it was happening so well. (It rarely does.) It was like I was a passenger on a ship -- I often think of this analogy -- manned by a wise and able captain. I was just along for the ride. (Actually, I think part of the success of the day was due to sensible lesson plans -- ones that set goals that could actually be reached in 45 minutes. This is something I'm getting better at.)

I've been impressed with the work of the 9th grade boys. Today, one boy, especially, was attentive and mature in his approach to class. After going over an assignment, I asked if there were any questions, and he immediately raised his hand. After pausing for a moment and furrowing his brow in reflection, he asked a very cogent question of clarification. Last year he wouldn't have done anything like this.