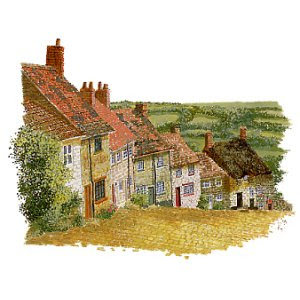 A 19th Century English Village
From Frank Kermode’s “Afterword” to the Signet edition of Middlemarch:

A quote from a letter by George Eliot, addressing her publisher’s concern that the novel wasn’t coming together: “There is nothing that will be seen to be irrelevant to my design, which is to show the gradual action of ordinary causes rather than exceptional.”

“...the first infallible indication that [Middlemarch] is a masterpiece may well be the tenth chapter, with its intimations of social density and narrative breadth.”

“Celia is satisfied with things as they are, especially such primary things as babies, and if George Eliot believed one thing more than another, it was precisely that such humanly interesting matters were the foundation of virtue and happiness.”

Kermode notes that there are many “researchers” in the novel: Casaubon (mythology) , Lydgate (his medical studies), Mr. Brooke (when he was young), Farebrother (entomology), and Dorothea (her studies to help make life better for the villagers).

Kermode suggests that Ladislaw is a literary failure, an uninteresting caricature, as are some of the minor characters.

“...one sees the variety of techniques by which Eliot demonstrates that no man is an island...No writer has ever represented the ambiguities of moral choice so fully.”

Lydgate is first undone by the professional actress Laure, and later by the amateur, but excellent, play-actress Rosamond.

“Of all social relationships, marriage is the most complex and ambiguous. The marriage of Lydgate and Rosamond is one of the great fictional representations of this.

From an Eliot letter: “It is the habit of my imagination to strive after as full a vision of the medium in which a character moves as of the character itself.”

“We might even allow that her book, without ceasing to be art, does some good. She wanted this, but of course she was clear that she could not produce a Bulstrode among novels, putting things right by philanthropy; her aim was to write books like Dorothea, of ‘incalculably diffusive’ effect, tending ultimately in however small a way to the promotion of social harmony; thus it might be said that because Middlemarch was written, ‘things are not so ill with you and me as they might have been.’”