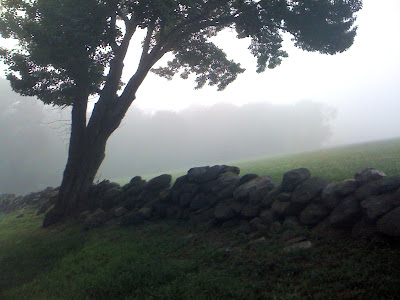 Today's bike ride was through summer mist and stillness. I started at 7:00 am, to beat the heat, and rode on some old roads that were strange to me -- long, hidden, and silent roads that wound among trees that were utterly still in the breezeless air. I stopped beside a place of dark woods, and as I watched for a few minutes I saw no leaf moving even slightly. A bit later, after pumping up a long and difficult hill, I passed the tree shown above, with the mist over the farmland behind it. Again, nothing was moving, all was still, no sound all across the hills.
at Thursday, August 20, 2009