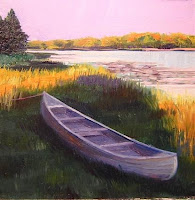 A DAY ON THE RIVER

Yesterday I spent a light-filled day on Wood River with Jaimie, Noah, and Matt. Jaimie brought his bright new canoe for Noah and Matt, and I floated alone in my inflatable kayak. There was sunshine everywhere – among the breezy trees, on our arms and backs, and – best of all – in the clear, cold water of the stream. Luckily, we had plenty of sunscreen and we spread it on with generosity against the steady sunshine. We were four sunbathers on a river given over to late June brilliance. I enjoyed showing Noah the glowing lights in the water as we paddled along. When we passed near a patch of lit-up water, I slowed and showed him what I called “sunken gardens”, places just below the surface where green plants swayed in the sunshiney current. Noah, I think, totally loved the day. He became a true river-boy yesterday. At first, he was hesitant and nervous about entering the dark water, but only for a few minutes. Before long, whenever we stopped he ventured a few feet away from us in the shallow water, searching for signs of strange life. He found a frog, a small, gleaming turtle, and countless small insects. He especially loved the water striders. On a number of occasions, we stopped to watch (and sometimes catch) these graceful surface dancers.

It was a day designed for brothers and dads and sons and grandsons, a day with two small boats under the brightest of suns.