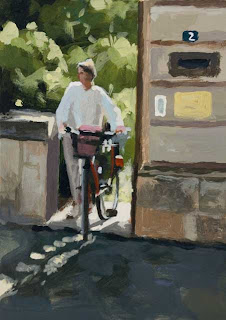 One Teacher’s Alphabet: I is for Impulsive

I’m often critical of myself for being too impulsive in class, but perhaps I should ease off the criticism a bit. Perhaps I worry too much about my tendency to say things in class that are inadequately thought out and gracelessly worded. Yes, there have been countless times when I have “shot from the hip” as far as words go, and usually those sentences seem to go nowhere but off into the atmosphere. I’ve often wished I could pull some hastily spoken words back, but of course, that’s not the way words work -- and maybe its not such a big deal anyway. After doing a little dictionary work, I realize that I may need to temper my self-condemnation. For instance, I found that the word “impulsive” derives from the Indo-European root meaning to thrust, strike, or drive, and surely I don’t want to eliminate those verbs from my teaching. I definitely want to thrust new ideas toward my scholars, strike the entire class with fresh ways of thinking, and drive the scholars toward excellence. The actions suggested by those words are always the driving force in any rousing and inspiring class. In addition, the following words come from the same root as “impulsive”: pelt, pulsate, push, compel, dispel, expel, impel, impulse, propel – and certainly the atmosphere suggested by these verbs should be present in my classroom. There’s a feeling of dynamism and progression in the words, a sense that something is being driven forward and fundamentally changed – the precise ambiance I want to maintain in my middle school English classroom. When the scholars leave my classroom each day, I want them to feel like they’ve been struck by utterly new emotions and pushed forward by full-size ideas. That would be the good – very good – side of the impulsive teacher coin.