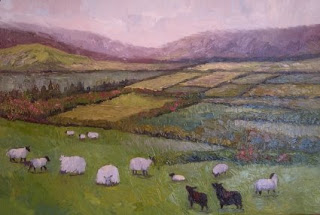 
If the ancient adage that says we learn best from our mistakes is accurate, then I had a marvelous day of learning today, because I realized that I had made a conspicuous and harmful mistake. I had thoroughly bungled an exam assignment – messed it up, blew it, botched it. I had given the 9th graders an exam outline that was poorly thought-out and thoroughly inconsistent with my teaching philosophies. The truth came home to me this morning: my exam assignment deserved no higher than a ‘D’. I learned about this mistake through the kindness of a student’s mother, and also through the well-mannered honesty of the students themselves. The mom came to me in the morning to express, in an understated and gracious manner, some concerns she had about the expectations for the exam. At first I felt the old self-protectiveness rising in me, but thankfully I was able to settle down and listen carefully to what she was saying, and it slowly became evident that she was making a very good point. Later, I spoke to the students about it, and many of them – just as politely and respectfully as the mom – suggested that the requirements for the exam were a bit confusing, and perhaps even a little unfair. Fortunately, I had some free time later in the day, during which I was able to sift through my thoughts about the issue, and slowly but surely the truth floated up as easily as the sun appears, some mornings, quite suddenly above the horizon. I saw the simple truth: I had made a dumb exam outline. I had goofed. What’s surprising to me, looking back, is how good I felt when I realized that uncomplicated truth. I guess it was a little like the sun coming out from clouds. I had made a mistake, but it was ok. In fact, it was more than ok, because now I had a chance to learn something about being a better teacher. I could change, grow, improve, reach a little higher. I don’t mean that I was glad I had made the mistake, just that my life opened a little wider because of it. Teaching has always seemed like an almost immeasurable enterprise to me, and today the boundaries pushed out even further. Lucky me.