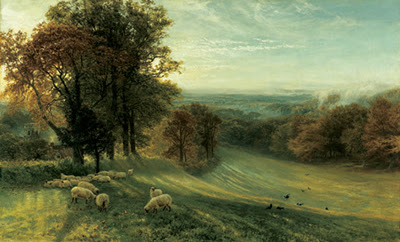 On this unusually warm and airless autumn day, I worked over at school on the coming week’s lessons, but for the most part it was not a productive time. For some reason, wonderful and clear ideas did not seem to be coming. Every lesson and assignment I thought of seemed paltry, insignificant, and destined for failure. I felt like an amateurish sailor toiling against an uncooperative sea.

And that was exactly the problem. I was thinking of myself in the wrong way – as a lone, solitary, limited individual who had to find, all by himself, rich and rewarding lessons for his students. It was little me against the ocean called “teaching 9th grade English”. I gradually began to see the falsity of that viewpoint. I began to realize – remember, actually – that what I really am is a part of an infinitely intelligent universe that does beautifully by itself, without interference from what I think of as “me”. I remembered that a vast and measureless power is at work in my lesson-planning and teaching, a far greater power than exists in one small brain in a skull. While I was struggling to “invent” lesson plans, this infinite mental force (often called God, or Allah, or the Tao, or just the Universe) was quietly going about its business of keeping everything running harmoniously. Even my struggling was part of that smooth business – just some small whitecaps on the surface of the well-balanced ocean of life. Everything – even my frustrated search for brilliant teaching ideas – was happening just the way it had to, just the way the ubiquitous and all-powerful present moment decreed it must.

As I began to see this picture more clearly, I gradually calmed down. I slowly began to feel like a self-assured sailor working easily with the wind rather than an unskilled deckhand struggling to make headway. Like the wind, the good teaching ideas were out there, I knew. I just had to relax, let them come quietly along, and then cooperate with them in a modest but confident way. A faithful and vigilant teacher doesn’t have to find good ideas for lessons; the ideas, like the wind on the sea, will find him. I began to see that that’s the only way teaching can sail along to new and surprising places, even on becalmed October days.