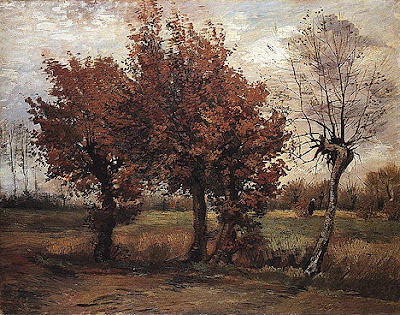 I realized today that I didn't adequately explain the current writing assignment to the 9th graders. I'm afraid I fell into an old familiar trap of mine -- rushing. When I gave the assignment on Tuesday, I think I felt like I was falling behind in the lesson I had planned, and so I cut short my explanation of the assignment. Instead of spending a few productive moments answering their questions and clarifying the details of the assignment, I basically read it to them, asked if they understood, and moved on to the next step in the lesson. Instead of thoroughly preparing the ground for a good crop of essays, I just tossed the "seeds" down on rock-hard soil. I shouldn't be surprised, then, if the harvest is less than bounteous.

During our "committee" groups today, I noticed that Dale initiated the conversation in his group. This might appear to be an insignificant detail, but in Dale's case, it's a major step.

In several classes, we held our “committees” (discussion groups of 3 or 4) outside, and, in one instance, I quickly grew impatient as the groups wasted time selecting a place to sit, talking about unrelated topics, and choosing who would speak first. Luckily, however, I gained the upper-hand of my impulses and refrained from saying anything. Sure enough, before long I saw that all the groups had settled into thoughtful discussions.