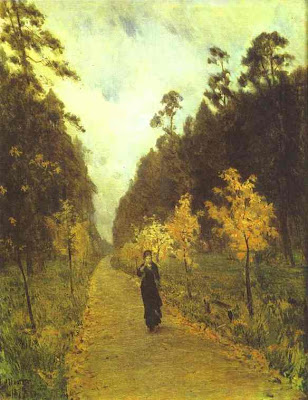 At chorus this morning, I was impressed with how many kids were singing heartily. Even the 9th grade boys were enjoying themselves. They giggled and whispered in between songs, but when the music began again, they got seriously into it. As far as I could tell, the great majority of kids in the room were singing with considerable interest and delight.

I wonder about the students who always seem alone. In this year's 8th grade, several kids seem to be forever by themselves. I see this often at our brief break-time during class, when the students have one or two minutes to hang out and chill. This morning at least two kids just stood alone during the break-time while the others gathered in groups to unwind. It starts me wondering: What is it like for a teenager to always be alone? Do these solitary kids necessarily feel lonely, or do some young people actually enjoy their solitude? Is there anything I, as a teacher, can do to bring these loners into some kind of camaraderie with their class? (The small-group work probably helps somewhat.)

Several students in the 9th grade have assumed a greater leadership role this year. Perhaps leadership is not the perfect word here. Maybe earnestness would be better, for these students seem to be far more earnest than they were last year. They seem to have become, over the summer months, more serious and intense, less inclined to silliness and more interested in seeing how well they can do in school. It's a notable transformation.

I insist that my students show an alert posture in class, and the 8th graders are catching on quickly. I do notice, though, that some have a habit of leaning their chin on their hand during class, which might give the appearance that they are bored. I'll have to talk to them about this. It's ok to feel bored or uninterested (it happens to all of us), but it's not ok to show it.