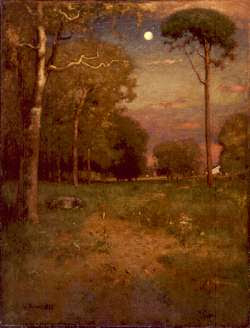 The last two mornings, my five a.m. walk up and down the hill in front of my house has taken place beneath a full moon floating above the homes in the still dark sky. The glow from the moon and the soft shine of the streetlights lent a sense of mystery to my exercise. I hiked up the hill like I was alive in a special and strange universe, which I am. The poem below, from www.poems.com, captures some of this feeling.

Of salt's place in ancient Roman currency,
paid out in rough burlap bags

to soldiers bearing the weight of empire,
I'll speak for a while tonight.
For as long as I can recall some scrap
of trivia, I'll utter circa, anno domini,
I'll trace the bloody lines of Caesars
and serve garum, a sauce of fish
left to curdle in the light of that bronze sun,
which I know only as much of
as childhood reading could teach me.
I care even less for it, it must be said, tonight,
while you sleep on the couch,
your body careless and dreaming,
calm, lulled by my invocation
of the useless, the quotidian, the dust-deep
particulars which I've stored
against—what? A winter so long
we forget our names, our numbers,
our address here in this town
that won't do us the sweet favor of fading?
No, there is no reason to know
any of this, to say
not gesundheit or God bless you or even yuck
to the machine gun sneezer
across the dinner table last night
but rather to offer
in perfect serenity to the half-deaf world
the average speed of the human sneeze
as it leaves the nose like a shinkansen,
the Japanese word for their hurtling bullet trains.
Which leads me to say how kamikaze
means divine wind, a fact I loved
before I loved you. And there I go, rattling
like an old fan. And still you sleep,
small and warm, having asked
in your drowsing slip of a voice
that I talk and talk, quietly, without cease,
about anything, anything at all,
until you drift and I am at last the one you dream of.