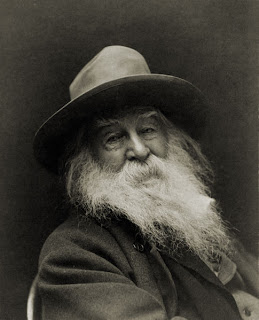 UNSELFISHNESS AND THE IMAGINATION

It occurred to me today, while I was reading some of Whitman’s great imaginative poems on a bike-ride stop, that using the power of the imagination is really the only way to overcome selfishness. To put it another way, people who can’t use their imagination are doomed to a meager life of selfishness. Whitman was a man of immense imagination. He was able to get out of “himself” – way, way out – so he could appreciate the immensity of the universe that he was a part of. His imagination helped him realize that he wasn’t simply a small, isolated “self”, but was part of an infinite cosmos (or Kosmos, as he wrote it) in which everything was a piece of everything else. In his visionary poems, he journeys through the entire universe, identifying himself with every object, animal, person, and power. He was them and they were him. There were no small selves, only one measureless Self. It was a universe completely devoid of petty selfishness, and only the imagination can help us find it.