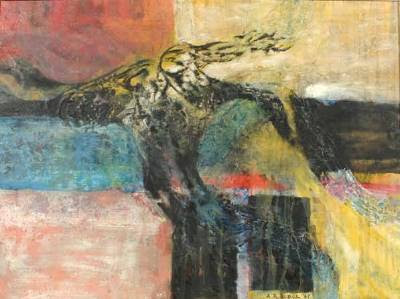 "Trees in the Wind", by Janet Roth Block

NO STRUGGLE, NO PROBLEM

It occurred to me this morning that a problem exists only where there's a struggle. If there's no struggle, there's no problem. The logical conclusion from this is that if I want to eliminate problems in my life, I simply have to stop struggling. No struggle, no problem. I began thinking about this on a stop on my bike ride. As I was drinking some water and watching the branches in a nearby tree wave in a breeze, I realized that the branches were not doing what we call "struggling". You might say they weren’t resisting the wind, but appeared, rather, to be simply giving in to it and allowing it to push them this way and that. As I watched the branches sway and lean in the wind (which sometimes gusted strongly), they seemed beautiful in their movements. Far from presenting the appearance of confronting a "problem", they looked totally harmonious and at peace. What we might have called a potential problem (the wind), they were handling like something advantageous -- like a gift they could make good use of. They weren't struggling, but rather submitting, acquiescing, conceding. In a sense, they were "playing along" with the wind, and thus there was no possibility of a struggle.

This, however, does not mean they were being weak. The branches I was watching were not weak, but in fact were demonstrating their strength through their limberness and flexibility. They were, in a sense, overcoming the wind by yielding to it. By not struggling, they were powerful enough to easily survive the wind to sway and bend another day.

Perhaps I need to learn to "play along' with whatever comes my way. There can be no problem for someone who yields with grace and strength to the sundry winds of life.