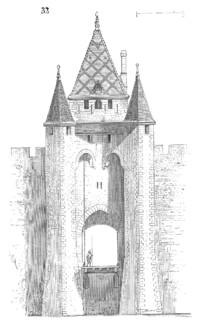 Today I watched stage 4 of the Tour de France, a rolling stage through the and Brie regions to the east of . It was a fairly uneventful stage – just a few breakaway riders followed by the smoothly-sailing peloton. As usual, I loved the look of the idyllic scenery. The riders passed through one charming, old-fashioned village after another and moved past countless quiet pastures with livestock lounging and wondering what all the excitement was about. Just before the finish line, the peloton passed through the beautiful town of , founded in 1163 by Louis VII to protect the of at the boundary of the Champagne. It is still surrounded by a partly intact wall. In 1204 Philippe Auguste held parliament in the city, and Saint Louis resided in the city before departing for the Eighth Crusade. During the French Revolution the name was changed from le-Roi (the king) to sur-Yonne (on the River Yonne). The race today finished at the town of , the gateway to , an attractive village 80 miles south east of on the banks of the Yonne. A town of some 12,000 population, the historic part is built on the side of a steep hill overlooking the river. Much of its medieval nature has been retained -- narrow cobbled streets, courtyards full of flowers, a number of timber-framed 15th and 16th century buildings and churches, and the gate of , a remnant of the original fortified city wall. Joigny has its own vineyard and is also on the edge of the Chablis wine growing area. The internationally known Cote St. Jacques restaurant is in Joigny.
Ah, how much I am learning about as I sit before my TV watching this magnificent bike race!