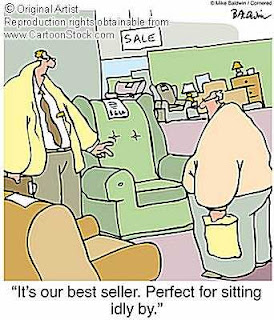 It’s surprising to realize that I can exhibit a great amount of power when I’m doing nothing. This, of course, seems like an utterly foolish statement when we consider the generally accepted notion that the more we do and accomplish, the more power we demonstrate. We’ve been trained to believe that always doing something is the road to a successful life, whereas doing nothing is the road to indolence and discontent. This has led to the helter-skelter, get-things-done lifestyle that many people lead, a lifestyle where doing nothing is synonymous with failure. What I’m slowly coming to understand, though, is that “doing” something usually means allowing my ego to take center stage, and this is a recipe, not for a feeling of power, but ultimately for a feeling of weakness. If my life is centered around “accomplishing” as much as possible, then it’s centered around my ego – my personal “self” trying to complete as many tasks as possible against the enormous odds life sets up for me. It’s a formula for disaster, simply because, in the end, anyone’s ego is far too small to accomplish a satisfactory amount in the vast universe we live in. There will always, finally, be a feeling of smallness, insignificance, and dissatisfaction. On the other hand, when I’m in a “doing nothing” zone, I’m sort of relaxing and allowing the work to do itself, and oddly, I usually feel much more powerful. It’s like I’m not using will-power, but universe-power. I’m participating in getting the papers graded, or in cleaning the apartment, or in planning my daily lessons, but, in a sense, I’m not doing anything. The job is doing itself, and I’m along for the ride. That’s the kind of “doing nothing” that, paradoxically, seems to accomplish a great deal for me. An old Zen master once said, “Ho ho. For forty years I have been selling water by the river and my efforts are totally without merit.” He’s been “doing nothing” and enjoying it immensely.